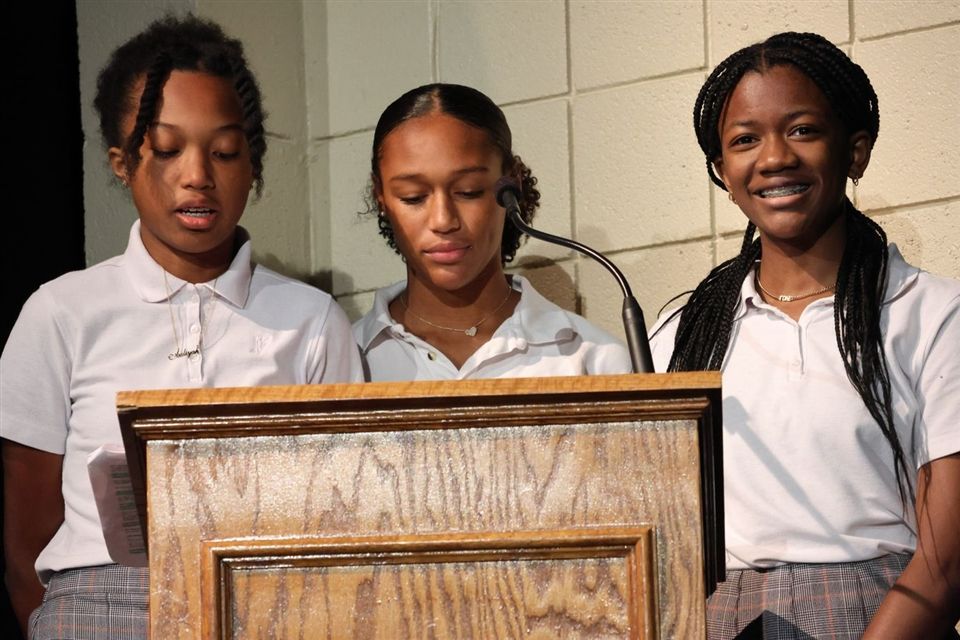 Celebrating the Life of MLK

"The time is always right to do what is right." - Dr. Martin Luther King, Jr.

Below are excerpts from Grade 8 students’ presentation:

Dr. King was born in Atlanta, Georgia, on January 15, 1929. He attended Morehouse College in Atlanta after graduating from Booker T Washington High School at 15! After graduating from Morehouse, Dr. King attended Crozer Theological Seminary and was ordained as a Baptist minister in 1948 at 19! Dr. King and Coretta Scott married on June 18, 1953, and had four children.
Dr. King was only 39 years old when he died. In his short lifetime, Dr. King fought against many injustices. Dr. King fought many battles before the Sanitation Workers Strike of 1968, which took him to Memphis, where he was assassinated. Some of the events include the Montgomery Bus Boycott in Alabama, the bombing of Dr. King’s home, and being put in jail on April 16, 1963, for peaceful protests against the unfair treatment blacks received in the city. Dr. King didn’t waste time sitting around in jail. While there, he wrote “Letter from a Birmingham Jail,” which defended non-violent resistance to racism.
The March on Washington was the next highlight in the long struggle for equality. A record number of over 200,000 protesters came together in Washington, D.C., on August 28, 1963, at the Lincoln Memorial, where Dr. King gave his famous “I Have a Dream” speech. Soon after, the Civil Rights Act of 1964 was passed by Congress! The fight for civil rights continued.
For years, African Americans had been denied the right to vote. To vote, African Americans had to pass “tests” like telling how many bubbles were in a bar of soap. These tests were designed to keep African Americans from voting. What’s worse, whites were not given the same tests or any test to vote. So, the people of Alabama decided to do something about it. The peaceful protesters marched in 1965 from Selma to Montgomery, Alabama. The media outlets showed law enforcement violently attacking the marchers in Selma. This resulted in other marches all across the United States!  And people of different races and faiths came to Alabama to join the march!
The most important outcome of Selma was that President Johnson signed the Voting Rights Act of 1965 on August 6. The last crusade Dr. King fought was helping African American sanitation workers in Memphis, Tennessee gain equal pay and working conditions to their white colleagues.
In 1968, Memphis African American sanitation workers faced dangerous working conditions and low pay. When the weather was snowy or rainy, men took shelter in the backs of the garbage trucks, which routinely malfunctioned. It was in one of those dangerous trucks that Mr. Robert Walker and Mr. Echol Cole lost their lives.

Memphis Mayor Henry Loeb, described as a “penny-pinching, anti-union, segregationist,” would not spend public works money to buy newer, safer garbage trucks. Black men were working on the trucks, so Mayor Loeb didn’t see the need to spend public funds to ensure they were safe. Aside from the dangers of the old trucks, the work was very difficult. Sanitation workers, called “tub toters,” worked in cold, wet, and hot weather. The garbage bins didn’t have lids, and people did not bring the bins to the roadside, so sanitation workers had to carry bins that weighed a lot. Sanitation workers were not allowed to drag the trash cans because people didn’t want tracks in their yards. The workers had to put the bins on their shoulders, where the wet, foul-smelling trash leaked on them and their clothes.

In memory of the last battle King fought, students read passages from Memphis, Martin, and the Mountaintop: The Sanitation Strike of 1968. This book was written by Alice Faye Duncan and beautifully illustrated by 5-time Coretta Scott King award recipient R. Gregory Christie, who has visited Ensworth as a Patchwork guest artist.

High School students welcomed Joe Brady, former Ensworth Math teacher, to campus to share his personal experience of seeing Dr. King speak in Memphis. Mr. Brady was attending Southwestern (now Rhodes College). On April 3, 1968, Dr. King came to Memphis to prepare for a march the following Monday on behalf of the striking Memphis sanitation workers. Mr. Brady and a cohort of his peers had a surprise visit from Dr. Martin Luther King, Jr. just before a planned speech at a Mason Temple gathering. At the Mason Temple, King delivered his famous "I've Been to the Mountaintop" speech. Students had a chance to hear part of this speech. The following day, Dr. King was assassinated. Mr. Brady shared about what it was like in Memphis during that time and its impact on his life.