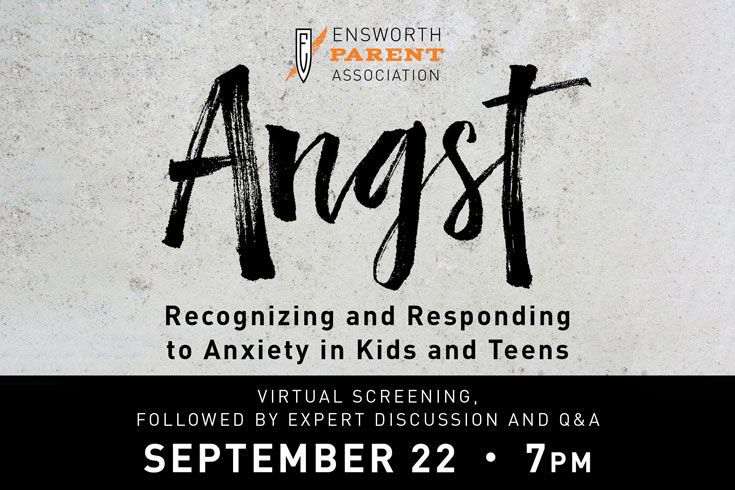 9/17/2020
Shanna Belott
The Parent Association presents a special online screening of "Angst" followed by a discussion on Tuesday, September 22 at 7 p.m.

"I’m so glad my dad got to see this movie. Now he knows I'm not making it up."
– Nine-year-old student, Chicago
"I wish this film had existed when I was growing up. It would have saved me and my family a lot of heartache."
– Father of three, NYC

“Whether you are a teenager, parent, educator or a mental health professional, you simply need to see this movie, and soon. And every school needs to screen this film. It’s that important.”
– Dr. John Duffy, clinical psychologist and author of "The Available Parent."

What age would you guess to be the median age of onset for anxiety right now, according to the World Health Organization?

It’s age seven.
Anxiety disorders are the most common mental health challenge in the U.S. And well before the pandemic created a new source of worry, anxiety was already rising at an alarming rate amongst children and teens. While anxiety disorders are highly treatable, only one-third of those suffering receive treatment.
"Everybody needs to know that anxiety disorders are real, common and treatable instead of viewing them as a personal choice or something to be ashamed of,” said Dr. Jerry Bubrick, Senior Director of Anxiety Disorders Center, Child Mind Institute. “Getting help early is crucial in giving people the tools they need to feel better. We just need to start the conversation."
The goal of the documentary "Angst", which Ensworth is screening virtually on September 22nd, is to open up a dialogue about an issue that is often hidden. Everyone involved in the development of “Angst” has a personal experience with anxiety – from the producers to the interviewees.
Mental health professionals have praised the film, which has screened in communities across the country.
“'Angst' is the most important, eye-opening documentary you will see this year,” wrote Dr. John Duffy, clinical psychologist and author of The Available Parent.
“Through first-hand accounts and expert commentary, the film leads you with great care through the many facets of teen anxiety, a massive, misunderstood and rapidly growing cultural epidemic. The teenagers in the film describe their suffering with stunning openness, grace and courage…As a clinician, I was relieved that the filmmakers were able to capture what so many of my young clients are suffering in these complicated days: the bullying, perfectionism, panic, obsession, and too often, hopelessness. And thankfully, the film ends with the notes of hope we so desperately need.”
Dr. Laura Kastner echoed this praise.
“'Angst' illustrates the pain and distress experienced by children and teens when they suffer from anxiety,” she wrote. “Hopefully, when viewers understand that this disorder is as definitive and valid as any other illness, like diabetes or asthma, they will come away with more empathy and resolve to raise their own and others’ awareness about this issue. When adults— including parents, teachers and any other person relating to children—see youth in distress, they need to avoid dismissing their pain. They need to listen, validate and get the child professional help. 'Angst' is inspirational; the courageous effort made by teens in the film to face their fears and become competent in coping is heart-warming and breathtaking. It is just the kind of public health promotion we need for educating caring people so that we can reverse the harms of stigma and support children in distress."
Producers Scilla Andreen and Karin Gornick use the 56-minute film to explore the root causes and effects of anxiety, as well as the resources and solutions that are available to combat this disorder.
“We felt it was important to make a movie that could raise awareness to open up the conversation and provide hope,” said Andreen. “So many people struggle with anxiety and have trouble talking about it. We want to change that.”

To make the point that anxiety, depression, and suicidal thoughts can affect anyone, the film interviewed the most decorated Olympian in history, Michael Phelps.

"I couldn't look at myself in the mirror and be happy with who I saw," the superstar admitted. Phelps shares how bullying and depression fueled deep anxiety and thoughts of suicide.

“Once I opened up about that and things that I had kept inside of me for so many years,” he says in the film, “I then found that life was a lot easier. I got to the point where I understood that it's OK to not be OK.”
Phelps hopes that by sharing his experience, he can help others understand that anxiety is treatable.
"The conversation surrounding mental health really hits home for me,” said Phelps. “Many people don’t understand how debilitating mental illness truly can be, and even more than that, how common it is, yet people are afraid to have the serious discussions about it. I welcomed the opportunity to be a part of 'Angst' to further the dialogue around mental health and to help people understand the impact anxiety has on our mental state and encourage people, especially kids, to ask for help."
“Angst” is bookended by an uplifting message of hope that anxiety can be overcome. Noah, a teenager in the film, describes it this way: “Anxiety doesn’t define me. It’s not just a curse; it also gives me strength.”
"If we can introduce prevention, self-care, and well-being to our children—even in the pre-K and kindergarten years—they can have a completely different life,” said Andreen.
This message has resonated with many parents and children who have screened the film.
“When I watched the movie after the lived-in experience we have, I was one of a very small percentage who went to seek mental health help right away,” one parent said. “It struck such a chord for me. What I was witnessing were things that had actually come out of my daughter’s mouth verbatim.”
One eighteen-year-old college student said, "I never knew that what I was experiencing was severe anxiety. I'm so grateful to know that there is treatment."
Please click here to register for Ensworth's free educational evening and to receive information on how to tune in at 7 p.m. on September 22.