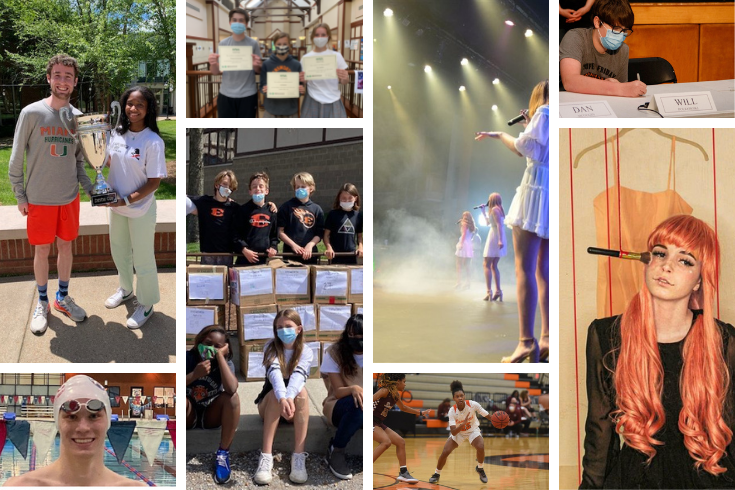 8/31/2021
Editorial Staff
What have Ensworth students been up to this year?

The World Languages Department at the Middle School would like to congratulate the three top scorers from each grade on the HSK (Hanyu Shuiping Kaoshi) or Chinese Proficiency Test, Level 1.

Grades 7 and 8 students recently sat for the Level 1 of the National Spanish Exam with many receiving honors for their performance.

Congratulations to President Genevieve Schaefer ’21 and Vice President Karim Daouk ’21 who will represent the High School student body during the 2020–2021 school year. Lanie Dyke ’22, Katherine Sales ’23, and Dean Ralsky ’24 were elected as Class Speakers for their classes.

Evan Petty ‘21 qualified in April ’21 for the US Olympic Trials in the 100 meter Backstroke, swimming the long course event in 55.76. Evan will join the Golden Bears to swim for University of California, Berkeley, in the fall of 2021

Congratulations to Elise Mason, who won the Grade 8 Presidential Debate advocating for Dwight D. Eisenhower as the best president in U.S. History.

Encore, our high school contemporary a cappella ensemble, was nominated for The Contemporary A cappella Recording Awards (CARA) best solo for their rendition of Christina Aguilera’s “Fall in Line.”

Each year colleges and college alumni groups recognize outstanding students throughout the country with book awards. This year, Ensworth juniors were honored for their excellence in various fields of endeavor by fifteen colleges and universities.

Presented annually in more than 2,000 high schools around the world to recognize outstanding students in their next-to-graduating class who demonstrate excellence in scholarship and achievement in other non-academic areas.

Recognizes an outstanding junior who has demonstrated sustained academic excellence and possesses a special interest in English and creative writing.

Recognizes a junior who displays excellence in the areas of academics, extracurricular activities, and community service, as well as a strong desire, either through words or actions, to change the world for the better.

Recognizes an outstanding high school junior who displays excellence in academics and leadership.

Established in 1916 with two purposes: to recognize the superlative academic achievement of young men and women, and to motivate students towards careers in science, engineering, and technology. The Rensselaer Medal recognizes an outstanding junior who has distinguished himself/herself in mathematics and science.

Awarded to a junior student who has demonstrated exemplary community service coupled with a commitment to leadership and helping others.

Recognizes an outstanding high school junior who has displayed a significant commitment to community service.

Students selected for the award embody the university’s motto, “Not for one’s self, but for one’s own,” and have demonstrated excellence in academics, leadership, and public service, in their respective communities.

Presented by the University of Virigina Club of Nashville to a junior who best represents the Jeffersonian ideals of scholarship, leadership, and citizenship.

Awarded to a student of high academic success and exemplary community service involvement, whose accomplishments embody St. Mike’s commitment to intellectual achievement, social justice, issues of peace and concern for others.

Awarded to the student at Ensworth who shows the greatest intellectual promise, as evidenced by actual achievements and demonstrated potential; who, by activities at school and in the community, has demonstrated a broad range of interests and accomplishments; and who is of outstanding personal character.

Thank you to our generous community who contributed to a record-breaking Grade 5 book collection drive for Book’em. More books were collected this year than ever before, amounting to over 44,500 books donated in the last 11 years.

In January, all Middle School students competed in the school round of the National MathCounts Competition. Students who ranked in the top ten went on to compete in an online Chapter Competition: eighth-graders Thomas Armstrong, Lily Bowen, Dax Martin, Lizzie McWilliams, Lux Paine, Will Polkowski, Niamiah Taylor, Jana Yassin, seventh-grader Julia Grace Linn, and sixth-grader Caroline Cox. Additional congratulations go to Thomas Armstrong ‘25 and Lily Bowen ‘25, who qualified to compete in the next level of the competition in the MathCounts Invitational, where they both once again scored in the top eight and qualified to compete at the state level.

The James N. Brown Award, given to students who have earned all As in Effort and Consideration throughout their sixth, seventh, and eighth-grade years, was presented to:

Jaloni Cambridge ‘24 was named Miss Basketball for Div II AA. She was also named to the 12-member United States team that will compete at the 2021 FIBA Americas U16 Championship.

From Homecoming Week to Spirit Week, our Tiger Houses have competed in various activities throughout the year. House points were awarded for competitions including Dress Days, Powder Puff Football, House Dodgeball, and Dining Hall Clean-Up. Designed to promote school spirit and build connections among the grade levels, each of our four Tiger Houses is led by two senior captains who were selected by the members of their houses at the beginning of the school year.