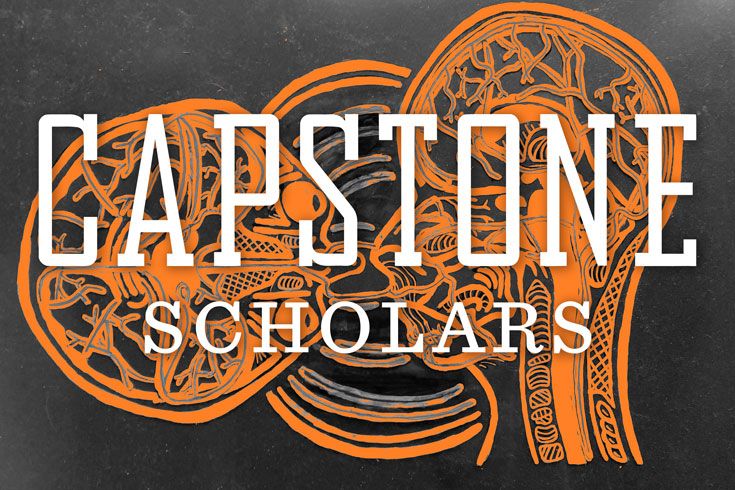 9/16/2020
Paul Downey
Despite the challenges associated with completing the academic requirements, seniors looked at the great opportunity that remote learning offered and persevered in their Capstone projects.
Ensworth’s Capstone Program gives students the opportunity to engage in an extensive exploration of a passion or interest that is above and beyond academic courses and extracurricular involvements—though it is often the product of weaving multiple inspirations into one.
To participate, a student investigates, proposes, and gains approval for a specific research project in Grade 11, and conducts the research and presentation of their findings over the course of their senior year.
Although a presentation to the Ensworth community was not possible due to the pandemic, several seniors demonstrated the Class of 2020’s enterprising spirit by completing video presentations of their Capstone projects.

Under the direction of arts chair Jim Aveni and using the course material learned from Music Production, Music 2, and AP Music Theory, Gabriel Abram focused his project on the topic “Room Tunes: An Auditory Exploration of Indie/Bedroom Pop.” After describing the musical theory and aesthetic behind Bedroom Pop, he details the process of getting familiar with the small recording studio in the Elcan Arts Center. The pandemic, however, forced Abram to move all of his recording to his own bedroom, a happy accident for the low-fi sensibilities of Bedroom Pop. Check out Gabriel’s first two tracks, “I Love You” (featuring vocals by his sister, Chloe Abram ‘18) and “More Than That,” from the project on all streaming platforms.

Briggs Blevins conducted a similar deep dive into the recording process with his Capstone entitled “Expanding Music Production into the Studio.” The core of his research involved the various technologies of the recording process such as mixers, preamps, mic placement, and software. “As time progressed,” Blevins observes, “my capstone project slowly transformed from songwriting to actually learning how to use all the equipment in the studio as an extension of myself in the recording process.”

Senior Jessica Calloway combined her two favorite subjects—Spanish and photography—to explore Spanish, Latin American, and Mexican artists. Her essays, written in Spanish, compare two artists. “My research focused on how two artists—from different time periods, with different families, environments, and lives—could create such comparable artwork.” She then used her own photographic creativity to produce art for each essay in the style of the essay’s subject.

Page Chestler’s project combined her greatest passions—poetry and filmmaking/producing—using work from the upper-level Poetry and Reel History classes. Although the project centered around well-known poets throughout history, Paige took inspiration from contemporary poet Rupi Kaur for her original poetry written for the capstone. For the filmmaking aspect, she read the poems as a voice-over with her family’s old home movies playing in the background. “They have a certain nostalgic feeling,” she explains, “as some of the poem’s hidden meanings are about hope.”

Carrie Cohen: Comparison between the Plot of French Stories to French Ballets

Carrie Cohen’s love of ballet spans her entire life, from being in the School of Nashville Ballet since the age of 2 and being cast as Clara at the age of 12 in Nashville’s award-winning production of “The Nutcracker.” Having already finished the highest level of French at Ensworth, she used her senior year to combine these great loves. Cohen compared how the ballet adaptations of French ballets related to the works of literature that inspired them, particularly Sleeping Beauty, Manon Lescaut, and Giselle.

To begin her capstone that combined both science and art, My-Lan Le spent the summer before her senior year learning how to read MRI scans and working in a 3D design lab at Vanderbilt University. She used publicly-available medical images to create 3D models of cross-sections of the human heart and a 3D simulator for medical students to practice the invasive and risky procedures to remove blood clots in the brain. The experience allowed her to work closely with a pediatric neuroradiologist, and a first-year radiology resident.

Rylie O’Neil: “From Tang to Today”

Rylie O’Neil has been fascinated by the beauty of both the written and spoken forms of Chinese ever since her introduction to the language in Kindergarten. Her love of poetry led her to a study of Tang Dynasty poetry which is known as a golden age of Chinese poetry. The capstone culminated in the creation of a book of Tang Dynasty poetry paired with her modern interpretations. Her artistic flair was well-adapted for the logographic, hand-painted Chinese written word.

Two seniors with overlapping interests, Jordan Yi and Dante Rodriguez, spent their final year at Ensworth exploring the nature of particular types of relationships through the contemporary medium of podcasts. The first two episodes center on the interesting relationship dynamics between twins using interviews with family and members of the Ensworth community. Interviewees include Jordan’s grandmother, Mr. Knopp, senior identical twin sisters, and fraternal twin Kindergarteners. Listen at overandout.buzzsprout.com.

Dontavia Waggoner felt a kinship with author, actress, screenwriter, dancer, poet, and civil rights activist Maya Angelou in her ability to overcome the fear of speaking out on difficult subjects. After a thorough examination of Angelou’s life and work, Tay wrote a small selection of poems related to subjects like race and the recent tornadoes that whipped through Nashville. “I feel like sometimes it’s intimidating to speak out on a certain topic, and you’re not sure how people are going to feel about it,” she explained. “So this project was me speaking out how I feel towards the idea of racism—blacks and whites—and how I feel like everything is changing but at the same time, everything is still the same because really, not much has changed.”

These two students presented on their capstones in December 2019.

Max Moeller explored the “Relationship between the Economy and Developments in the Auto Market” using coursework AP Economics, 3D Design Technology, Physics, and AP Physics under the supervision of Danny Wright.

Using photographs from his trips to Paris, London, Santiago, and Singapore, Lucas Chaveyriat presented his capstone on “Architectural Photography: International Perspectives.” The pictures are a mix of film and digital photographs that display individual stories when juxtaposed together.
Back