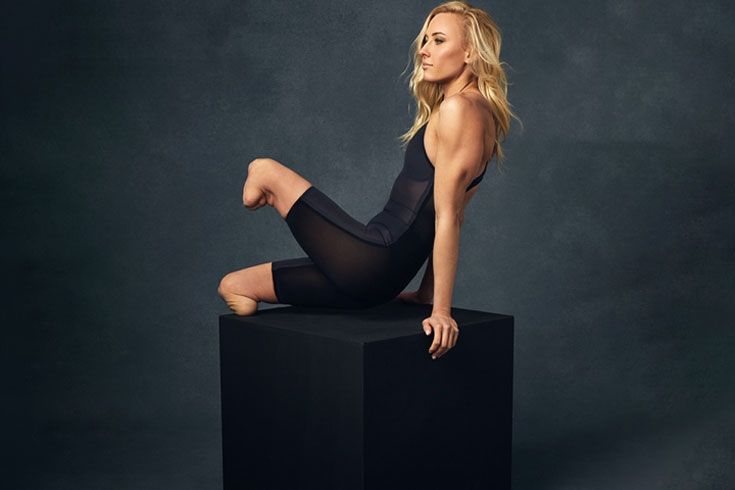 One of the World’s Most Decorated Female Athletes Happens to be a Double Amputee. She’s Speaking at Ensworth About Grit.

10/5/2020
Shanna Belott
GRIT - noun: Resolve; strength of character. Firmness of mind or spirit: unyielding courage in the face of hardship or danger.
Jessica Long.
All you need to know about the meaning of grit is summed up in the life of Jessica Long.
Long is amongst the most decorated athletes of all time. She has twice been named by Sports Illustrated as one of the World’s Best Female Athletes. She joined the ranks of Michael Phelps and Tim Tebow when she was honored with the prestigious James E. Sullivan Award, granted by the Amateur Athletic Union to the top American athlete in an amateur sport. She has smashed 20 world records and become a globally recognized star.
She’s also a double amputee. Someone who started out in the world as a Russian orphan. Someone who has endured - throughout her life - grueling surgeries for her legs.
Long has something to teach us all about overcoming obstacles and building resilience. Ensworth students and parents will get the chance to be awed and inspired by Jessica on October 7th, during a special webinar. Covid is preventing us from gathering in person, but Long will be with us at the Ensworth campus, sharing her remarkable story and answering questions virtually.

To register and receive a link to view this event, please fill out the form on this page.
Long has faced impossible challenges from the time she was born with leg deformities in Siberia.  She was placed in an orphanage as a baby and was adopted by an American family at 13 months.  Long had both of her legs amputated below the knee at 18 months, and she learned to walk with prosthetic legs as a toddler.
In spite of her challenges from day one on earth, nothing could stop her.
Long became involved with many sports, including gymnastics, cheerleading, ice skating, biking, trampoline, and rock climbing.
But she found her true home at the pool. Long, it turned out, was a swimming phenom.
At the tender age of 12, Long became the youngest American ever to compete at the Paralympics. And the youngest person ever to win a gold medal. Three gold medals, to be exact.
Long has gone on to compete at four Paralympic Games and win 23 medals, 13 of them gold, and won 52 World Championship medals. She was honored as the U.S. Olympic Committee's 2006 Paralympian of the year and Swimming World Magazine's 2006 Disabled Swimmer of the Year. She has won 3 ESPY awards from the ESPN network for “Best Female Athlete with a Disability.”
Long’s journey with grit hasn’t stopped at the pool. She struggled with anger, low self-esteem, and eating disorders.
“I had a really hard time understanding my life,” she told Toyota, as part of its coverage for one of its Team Toyota athletes. “Particularly challenges of being an amputee. There was a while there when I was having surgery every three to six months. And I was still really curious about my adoption and where I came from, especially when I was a teenager…I know it’s ridiculous now, but I think being adopted, I just always had this worry about being enough.”
Her search for peace and self-acceptance led her to reconnect with her birth parents in Siberia. The reunion was movingly documented by NBC in a 20-minute feature that aired with its Olympic programming, “Long Way Home: The Jessica Long Story.” Long has also been profiled in a documentary for the media site and nonprofit organization I Am Second.
Long was deep in training for the Olympic and Paralympics Games in Tokyo when the pandemic forced its postponement. As usual, Long is not letting this setback deter her drive or spirit.
Long’s message is that no matter what obstacles we each face, we are never alone. And there’s always a way through our obstacles.
“We’re all so different. We all have our own challenges and face different adversities, some more visible than others,” she told Toyota. “But when we talk about them and share experiences, people don’t feel so alone.”
To register and receive a link to view this event, please fill out the form on this page.
Back