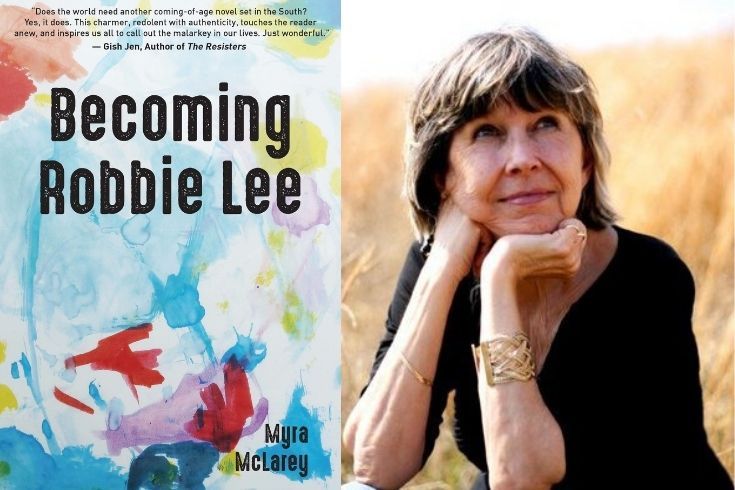 9/11/2020
Long-time Ensworth high school English teacher, Myra McLarey, has released a new novel: Becoming Robbie Lee.
Myra will host a special virtual event via Zoom to converse with Ensworth’s own David Whitfield at 6:30 p.m. on Tuesday, September 22. Join the live Zoom event here.
The publisher writes about Becoming Robbie Lee:
What do you do when the right thing to do is considered the wrong thing by everyone in your safe and secure world? In the summer of 1952, the summer before she turns eleven, Robbie Lee McElroy is faced with this question. Raised in a tiny village in southwest Arkansas, Robbie Lee has a best friend, a brother and sister she loves, and most important, a momma and daddy who make her feel loved and protected. But when she has to take part in caring for her cantankerous dying grandmother, who breaks all of the rules of the community—from being “too familiar” with colored people to being an infidel (or worse, maybe even a Catholic)—Robbie Lee begins a journey of discovery. She begins to see that she is a privileged part of a caste system, a system she has never named —but has always understood as the way things are. And should be. Robbie Lee’s realization of this double world, the ideal world she lives in and the falseness that lies therein, comes to her largely by observing the courage of those she has been raised to see as not courageous. Seeing such courage in action changes her understanding of what (and who) truly matters.
Kindle e-book copies can be pre-ordered for $9.99 here. Paperback copies will be available for $14.99 on the book's official publication date, Tuesday, September 15. For every paperback sold, $1 will be donated to the Equal Justice Initiative.
We hope you join us online on September 22 to celebrate Ensworth’s cherished educator.
Join the live Zoom event here.
Back