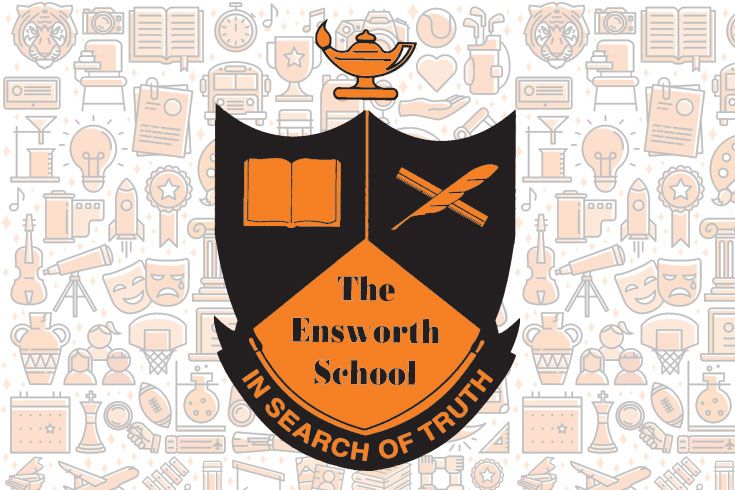 Jim Steinhouse '70 recently retired after selling their family business Steinhouse Supply Co. It was the only job he ever had, working there 41 years.

Rashed Fakhruddin '83 was one of two honorees for the Human Rights Outstanding Award during the Tennessee Celebration of International Human Rights Day 2019.

Matt Reasor '92 has a new art installation featuring 190 watercolor botanicals representing the trees of Vanderbilt’s arboretum in the lobby of Nashville’s newest boutique hotel, Graduate Nashville.
Jennie Rebecca Rodgers Springer '92 founded a non-profit called Faithfully Restored. She and three friends (including former Grade 2 teacher Jamie Heard) started the group after feeling a deep longing to give back and provide hope to other women in need. In addition to her work with Faithfully Restored, Jennie Rebecca teaches classes at barre3 in Brentwood. Learn more at faithfullyrestoredwomen.com.
Heather Niesen Wolper '92 in 2017 began her pie business, Good Pie Y’all, to give back to a church project, then grew it into a business that still gives back to the community as well as helping her family.
Michael Eskind '94 accepted a position in the summer of 2019 as Associate Head Coach and Recruiting Coordinator for Track And Field at the University of North Carolina having spent the previous seven years in the same position at Stanford University.
Reed Harrison Nirula '96 Leveraging consulting experience with Reliance Entertainment and Memesys Cultural Lab in Goa and Mumbai over the past year, Reed has been tapped to head development at Andolan Films in Bombay, where she will join the team making features, documentaries and TV series for platforms across the Indian market.

Whitney Haley '01 was named Vice President and General Counsel at FCA Venture Partners.
Author W. M. (Will) Akers' '02 debut novel, “Westside,” was reviewed in The New York Times. His book is described as “a literary cocktail of gun molls, rotgut moonshine and skittering shadows” and “His prose is sharply crystalline, especially when describing minute, bittersweet and even ugly moments.”
Kat Braswell Campbell '08 began a new job as an Aesthetics Nurse at a new practice called Indie Skincare. Her job includes botox, microneedling, medical grade chemical peels, and dermaplaning.
Lucy Ralph '08 is Assistant to the Vice President and Publisher of Garden & Gun magazine in Charleston, SC.
Rebecca Ralph '08 is a Senior Account Representative with Taqarabu Hybrid Communications, a Public Relations and Communications firm in Dubai, UAE.
Robert Blair Adams '09 is Founder and COO of Zenith Mental Health.
Miles Asafo-Adjei '09 recently started working at HCA Healthcare as a Human Resources Manager on the Cultural Development and Inclusion team.

Melanie Berk '09 and husband Brendan Flanagan welcomed their first child, a sweet baby boy named August, shortly before their first wedding anniversary. Melanie works for an animal welfare nonprofit called Paws4ever, where she runs the foster program and teaches dog behavior.
Christina Chintanaphol '09 Graduated PharmD in 2018 from the University of Tennessee, now working as a Clinical Evidence Specialist at Medtronic.

Paul Clements '09 lives in Tulsa with his wife Marisa and their two dogs. Paul earned his Bachelor of Graphic Design and Master of Architecture from Drury University and received his architecture license for Missouri in spring 2019.

Sam Deaton '09 serves as President-Elect for the Nashville Junior Chamber of Commerce and will become President in July.

In March 2019, Spencer Foote '09 was promoted to be a Music Booking Agent at WME (William Morris Endeavor), where he books musical talent for fairs and festivals across the country.

Arun Gokhale '09 is currently sponsored to complete an MBA at the University of Chicago Booth School of Business.

Toby Graves '09 began a new job as Real Estate Advisor at Engel and Volkers.
Tyler Johnson '09 is a USAF F15C Fighter Pilot. He served in Europe for 3-1/2 years with 12 temporary deployments and one six-month tour in the desert. Tyler married the love of his life, whom he met skiing in Austria. They are moving to Japan for the next three years.
Jennifer Oxford '09 is going full time into her art business.
Gary Pope '09 began working at Ensworth in July as Dean of Students Associate; Library Associate.
Cosley Pulliam '09 resides in Charleston, SC, where she manages a group of member advocates for PURE Insurance.
Jackson Roland '09 has been with Apple for a few years now. His first two years at Apple, he was an image quality engineer. His current role is as a display experience engineer/software developer.
Emily Vaughan '09 became a registered dietitian, working at Tristar Centennial Weight Loss Management Center.
Lili Wallace Maki '09 is an LMSW working as a clinical therapist at Children’s Hospital’s Behavioral Health Unit. She recently married Jonathan Maki on November 9th, 2019.
Lauren Wines Thompson '09 married Robert Thompson in June 2019. Katie Smalley '09 was one of her bridesmaids. She also moved to Washington, DC to teach middle school math at Georgetown Day School.

Hannah Beath '10 completed a two-year term with the Peace Corps, where she served as an education volunteer in Sierra Leone and a health volunteer in Fiji overseeing health education services in local schools and communities. Upon returning to Nashville, Hannah worked with the Oasis Center, serving primarily immigrant and refugee youth. She now resides in Connecticut and works as a program coordinator for a nonprofit organization that supports community health centers and provides health services for low-income individuals.
Kirby Wiley '10 joined Ensworth in October as Communications Coordinator.
Lila Davis '11 went to Parsons School in NYC following Vanderbilt and got her associate degree in interior design. She worked in the city for Alexa Hampton. Wanting to return to Nashville, she got a job with Hastings Architecture doing commercial interior design; she will celebrate three years there in March.
Ashlyn Johnson '11 is currently living in New York City working as a publicist at a fashion and lifestyle consulting agency. She is beginning a master's program in Psychology in 2020 and is enjoying her second year in an all-female a cappella group.
Elam (Mangum) Freeman '12 was named to the Cystic Fibrosis Foundation “Nashville’s Top 30 Under 30.” This elite award recognizes 30 of Nashville's top professionals, philanthropists, and civic leaders under 30. By committing to a 16-week recognition program and philanthropic competition, they will add tomorrows for children and young adults living with cystic fibrosis.
Claire Kirchoff '13 After graduating from the University of Virginia with a Master's degree in Educational Psychology, Claire performed a year of service with AmeriCorps in Nashville through the Martha O'Bryan Center, where she supervised an after school program at Cameron Middle School. Claire is currently pursuing a School Counselor endorsement through the University of Tennessee, Martin and will be completing her final internship this spring. She has also applied for a Fulbright Scholarship to serve a ten-month term as an English Language Teaching Assistant in Nepal.
Bobby Bethke '14 is living in Glendale, CA, and pursuing a career in film. He has been an extra on several TV series and a production assistant for films and commercials. He recently previewed his short film, The D-Team, in Nashville for friends and family.
Sophie Cudd graduated from Southern Methodist University in May 2019 with these accolades: Phi Beta Kappa, Magna Cum Laude, SMU Hyer Society (nominated students are in the top 4% of the student body) and University Award for Outstanding Scholar of 2019. She majored with Departmental Distinction in English, minored in Ancient History. Sophie is currently employed at William Morris Endeavor (WME) in Nashville.
Coleman Goodwin '16 graduated magna cum laude with a degree in Accounting in only 3 1/2 years while playing baseball 2 1/2 years at Lipscomb University. He interned with Surgery Partners this past summer. He has an internship with LBMC for the winter/spring. In the summer, he is interning with Elliot Davis. In the fall, he will be pursuing his Masters in Accounting.
Corinne Parrish '17 and Liza Sweeting '18 were both inducted into the Order of the Gownsmen, Sewanee’s oldest academic honor society. Corinne additionally serves as a Sewanee Angel, a faculty-chosen student ambassador for the university.
David Reynolds '19 is a starting defensive lineman in his freshman year at Florida International University. David was featured on ESPN back in October for his interception during the FIU v. LA Tech, an impressive play that they called the kick-pick of the week!
Back